Fig. 1: Images of the e-coating line, e-coat tank and the ultrafiltration system

Nowadays most aeronautical parts made of aluminium alloys are protected against corrosion by surface anodising and multilayer painting. The treatment is usually carried out with Cr(VI) based compounds. However Cr(VI) substances are affected by REACh regulation and European Commission will set more and more restriction for their use from 2024 onwards. To date, there is not a single Cr(VI)-free protecting treatment for Aluminium 7000 series alloys that matches the results obtained with the Cr(VI) based coatings, so, it is necessary to develop an environmentally and Cr(VI)-free acceptable alternative process.

This work shows an alternative treatment to chromic acid anodising plus primer based on a colloidal and polyurethane anaphoretic e-coating, which is a water based surface treatment that meets REACh regulation. The results of this study have shown that it has good adherence, scratch and erosion resistance, chemical resistance, good paintability and similar behaviour against corrosion than Cr(VI) based coatings. The comparison of anaphoretic electrocoating against the chrome-containing process has shown a reduction of 40 % of emissions, 13 % of energy consumption, 30 % of lead time and 21 % of cost saving. The need of using high performance lightweight materials is pushing the aerospace industry to incorporate aluminium alloys in many parts of the aircraft. However, all aircraft components, and especially those of landing gears, need to be able to withstand friction and corrosive environments while continuing to operate at optimum levels, so that these aluminium components must be protected with coatings. Currently, the most widely used strategy to protect Al alloys is based on the application of anodisation processes and multilayer painting. However, this coating system commonly implies the use of Cr(VI) based compounds, affected by REACh regulation.

To date, there is not a single protecting process for Al 7000 series alloys that matches the results obtained with the Cr(VI) based coatings. In this context, it is necessary to develop an environmentally Cr(VI)-free acceptable alternative process (that is, free of any substance listed in REACh Annex XIV or Annex XV), that would enable the replacement of the actual anodising and subsequent spray priming processes. Such a process would also allow the coating of parts with complex geometries, which could support the development of new part design. Nowadays, some previous reports [1–3] state that anaphoretic electrocoating could be a real alternative to Cr(VI) treatments for aluminium alloys.

Electrocoating is a process by which electrically charged particles are deposited out of a water suspension to coat a conductive part. The electrocoat process is regulated by the voltage applied to a water based formulation that also contains polymeric resin or binders, pigments and solvents. Electrocoating products are referred to as anodic or cathodic, indicative of where coating deposition takes place. Anodic (Anaphoretic) electrocoating involves the use of negatively charged paint particles that are deposited onto positively charged metal substrates. Moreover, anaphoretic coatings are able to produce an intrinsic anodic layer during the growing mechanism (e-coat anodic barrier). It has been shown that oxide filaments grow first within the initial seconds due to a rapid dissolution of aluminium at the beginning of the process, later on it forms a dense sub-layer at lower rate during the entire deposition process [4].

Currently some OEMs in the aeronautical industry have approved an anaphoretic coating based on a highly pigmented epoxy composition to protect aluminium alloys. However, work has still to be done to improve its long-term corrosion resistance [5] and widen its application range within the aeronautics industry. The main objective of this work has been to face the research of a different REACh compliant anaphoretic electrocoating treatment, specifically a colloidal polyurethane anaphoretic system based on nanosilica, for the protection of Al 7075.

Al 7075-T6 alloy from Alu-stock was used to carry out all the studies, see the alloy composition from the quality certification in Table 1. Laboratory scale coatings were applied on 50 × 50 × 2 mm panels, whereas at pilot plant scale larger sized panels were used. The dimensions of these panels were selected considering the specifications provided by the standards detailed in Table 7.

Tab. 1: Composition of Al 7075-T6 alloy from the quality certification of Alu-stock

Two demonstrators were selected by Liebherr to evaluate the anaphoretic coating capacity to treat three-dimensional parts.

Alkaline degreasing with the commercial hot degreasing Bonderite AK 18 (supplied by Henkel) followed by acid pickling, 30 vol% of HNO3, during 2 min, were selected as pre-treatments before the application of the e-coating. After rinsing, some panels were also pre-treated with Thin Sulphuric Acid Anodising (Thin-SAA) in order to provide the coating system with a higher corrosion protection. The SAA treatment was carried out with 2.2 M H2SO4 and applying 10 V, during 12 min.

Lectraseal ELP V1 from LVH Coatings was used to produce the e-coatings. Lectraseal ELP V1 is a colloidal polyurethane anaphoretic system based on nanosilica and modified to get a higher reactivity and so a lower curing temperature. Carbon black pigments, OTS Black RFU particles, provided by LVH Coatings, were added to the anaphoretic bath in order to combine IR with thermal curing as to reduce heat effects on the aluminium alloy.

Chromic Acid Anodising (CAA) was used as reference system. CAA treatment was carried out with a 48 gL–1 CrO3 at a temperature of 35 ºC and a constant voltage of 40 V during 30 min.

Validation panels were treated in the e-coating pilot line shown in Fig. 1 using an ad-hoc e-coat tank that includes an ultrafiltration system, also detailed in this figure.

Particle size distribution and zeta potential of nanosilica particles in the anaphoretic bath were measured by a Malvern Zetasizer Nano ZS instrument and Zetasizer software v7.11. Eddy current was used to evaluate coating thickness and for this purpose, Fischer DualscopeMP20 instrument was used.

Electrochemical Impedance Spectroscopy (EIS) and Neutral Salt Spray (NSS) were used to analyse the corrosion properties. EIS was carried out in a three-electrode cell. The working area of the samples was 25 cm2. A silver chloride (Ag/AgCl 3.5 M) reference electrode and a titanium mesh counter electrode were used. The instrumental set-up consisted of a Bio-Logic Science Instruments potentiostat controlled by EC-Lab software V11.27. All impedance measurements were accomplished under potentiostatic control at the OCP stabilized after 60 min in the frequency range from 100 kHz to 10 MHz, using amplitude of 10 mV and 7 points per decade. The tests were done using 3.5 wt% of NaCl as electrolyte. NSS was performed using a Dycometalmodel SCC-400 salt spray chamber.

Adhesion of coatings was evaluated by dry-adhesion test following the standard ISO 2409 and an ad-hoc solvent rub test. This ad-hoc test implies 100 double rubs of acetone-soaked cotton considering failure the removal of coating and the exposure of substrate.

In order to provide the option of curing the e-coating with Infra-Red (IR), carbon black pigments were added to Lectraseal bath. Due to the non-reflective, highly absorbing nature of this pigment, it can be used in the present study as a sensitizer for IR curing. The primary carbon black particles are in the nanometric size range and will preferentially absorb IR radiation entering the coating and becoming effectively dispersed “heating elements”. It is important to mention that electric radiant heat (IR curing) has many benefits over the conventional convection system: non-contact heating, fast response, high efficiency, control accuracy, low first-time costs, floor space savings and clean heat [6]. These benefits fit well to respond the needs of aerospace manufacturers and MRO providers, who are always seeking to trim costs and improve production efficiencies.

In this study 2 gL–1 of OTS Black RFU particles were added into the anaphoretic bath and particle size distribution (PS) and zeta potential (ZP) of SiO2 particles were measured again in this new bath composition. Although a little displacement was observed from 213 ± 2 nm to 277 ± 10 nm and from –49.3 ± 0.96 mV to –43.8 ± 0.72 mV for particle size and zeta potential values, respectively, no significant changes have been occurred after the addition of the IR particles.

The addition of IR particles to Lectraseal bath provides blackish coatings that does not affect the coating´s quality and adhesion, see Table 2.

Table 3 shows the effect of the applied voltage on the thickness of the e-coating measured by Eddy-Current and cross-section FE-SEM images. These results show, as expected, an evident increment of coating thickness with the applied voltage. Obtained micrographs showed no evidence of particles and voids. The primary size of the particle content is towards the nano-range due to the colloidal stabilisation in the coating bath. Absence of gas porosity would be due to efficient diffusion of gas without coalescence into large bubbles. Adhesion test were carried out in these samples by cross-cut test obtaining Grade 0 according to the ISO 2409:2013.

To confirm the growth of the anodic layer during the anaphoretic process, cross section FE-SEM images were obtained for the 20 µm e-coating. As it can be observed in Fig. 2, the thickness of the oxide layer produced at 80 V during 1 minute was about 387 ± 153 nm. The growth of the oxide layer formed was verified according to its chemical composition (Al = 94.37 wt.% O = 5.63 wt.%) detected by EDX. 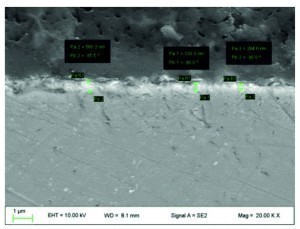 Fig. 2: Cross-section FE-SEM image of the e-coating and the oxide layer