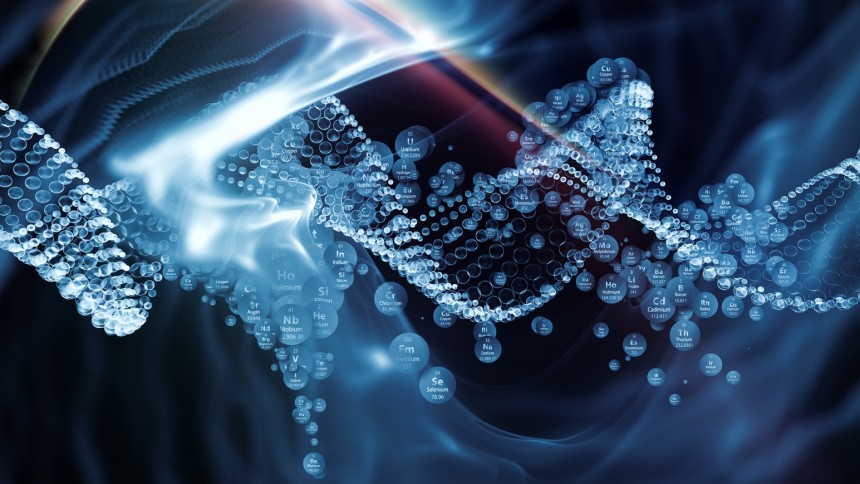 The paper covers the study of the structure and properties of rhodium coatings obtained by pulse current from an aqueous electrolyte solution containing no surfactants. The authors determined the optimal parameters of the pulse current that forms finer-crystalline, dense and hard coatings. The use of pulse unipolar current made it possible to obtain high-quality rhodium coatings without the use of surfactants.

The main advantages of pulsed electrolysis are that by changing only the shape of the polarizing current and adjusting its parameters, it is possible to quickly and easily control the deposition process [7–9].

The main field of application of rhodium coatings is protective and decorative coatings, for example, in the jewellery industry, and functional coatings, for example, in sealed contacts. Based on this, a number of requirements are put forward for rhodium coatings regarding their properties [10–12]. First of all, it is high corrosion resistance and hardness. The use of these coatings as decorative ones is possible with a high reflection coefficient, which is achieved by the introduction into the electrolyte of surface-active substances (SAS or surfactants), which in turn reduce the hardness and corrosion resistance of the coating. It is possible to increase the reflection coefficient by reducing the crystallite size, which can be achieved by applying the pulse current. In this case, it is possible to significantly reduce the concentration of surfactants, and in some cases, completely abandon them.

The article presents the results of a study of the structure and properties of rhodium coatings, which are obtained by a pulse current from a surfactant-free electrolyte. 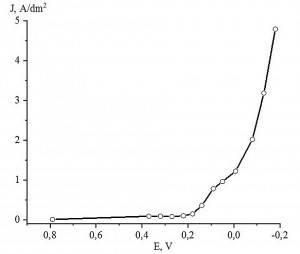 Fig. 1: Potentiodynamic volt-ampere dependence obtained in the rhodium plating electrolyteRhodium coatings were obtained by electrodeposition from an aqueous electrolyte solution of the following composition (g/l): metallic rhodium – 8–12; sulfuric acid – 50–150; sulfamic acid – 10–12; pH – 1.0. The electrolyte temperature was maintained constant and equal to 295 K. The current pulse repetition rate (f) varied from 30 to 1000 Hz. The pulse relative duration (Q is the pulse-duration ratio) varied from 2 to 50. The average current density (jav) was 0.8 A/dm2.

The average pulse current density was selected so that the forming film had a qualitative appearance. Pure metal plates were used as the anode during electrodeposition. This allowed to keep the concentration of ions of the crystallizing metal constant, which positively affected the repeatability of the experiments. Copper or iron foil was used as a substrate during electrodeposition. The foil for the substrates was prepared as follows. First, the substrates were subjected to mechanical and chemical polishing. The most commonly used solution for chemical polishing was a 5 % nitric acid solution. Chemical polishing reduced the roughness and removed the strain hardening formed after mechanical polishing. Then the substrates were degreased in a Viennese lime solution and washed in distilled water.

Overvoltage in pulsed deposition modes was measured on the equipment that compensates for the ohmic potential drop in electrolyte. The time dependences of the current and electrode potential were recorded using dual-beam oscilloscopes С1–68, С1–69 with a resolution of up to 0.5 mV/cm. The electrode potential values were fixed relative to a saturated silver chloride electrode of the EVL-1MX type. Figure 2 shows the characteristic oscillograms for rhodium plating with different pulse durations (tp).

The concentration of hydrogen in the crystal lattice was determined by vacuum fusion method.

Fig. 2: Example of oscillographic dependences of the polarizing current (1) and potential (2) of a rhodium cathode on time: a) tp= 5 ms; b) tp= 2 ms

The deposition of metal during pulsed electrolysis occurs at continuously varying in time values of the electrode potential E(t). For the same deposition rate during the transition from a constant polarizing voltage to a pulsed one, with an increase in the pulse steepness (by decreasing tp and increasing Jmax), the following increases: the shift of the maximum values of the cathodic polarization to the electronegative region, its rate of rise from minimum to maximum value, as well as the amplitude of the oscillations ∆η.

As the studies [13, 14] show, pulse current has a significant effect on the surface appearance and topography of electrolytic coatings. Figure 3 shows photographs of the surface of rhodium coatings obtained under various electrodeposition conditions.

Coatings obtained with direct current have a pronounced developed surface structure. Such coatings have a matte appearance and a large number of macrodefects, such as pitting. Coatings obtained with pulse current, on the contrary, have a smoothed surface relief, which ensures their luster. It should be noted that shiny coatings initially appear at the edges of the workpieces. With a further increase in the amplitude of the current density, the workpiece becomes completely shiny. 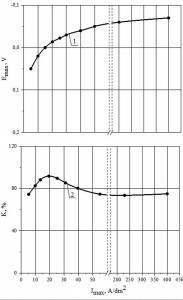 Fig. 4: Dependence of the amplitude of the cathode potential (1), reflection coefficient (2) of rhodium coatings on the current density amplitude (Jav = 0.8 A/dm2, f = 50 Hz) Studies of the influence of the current pulse repetition rate showed that at low frequencies of 10–20 Hz, poor quality coatings are formed. This is due to significant release of hydrogen into the gas phase and its absorption by the coating. Assessment of the concentration of hydrogen introduced into the crystal lattice showed that the total amount of hydrogen in these coatings was 170 ppm. It results in cracking of rhodium coatings at low frequencies. Therefore, despite the fact that the strongest influence of the pulse current on the coating structure is observed at low frequencies, their use is limited to a decrease of Jav to maintain the required value tp.

An increase in frequency of more than 80 Hz leads to the formation of coatings in more equilibrium conditions. The indicated effect ceases to manifest its impact at frequencies of the order of 1000 Hz and higher. This effect can be explained by the following factors. First, by the potential amplitude decrease () with increasing frequency, which leads to the formation of thermodynamically-stable Emax large nuclei. In addition, the reduction of the pause causes a decrease in the electrode potential ripple; the dependence E(t) is gradually “smoothed out”, approaching the potential corresponding to direct current.

In a pause, E does not have time to fall below the metal deposition potential. Therefore, its plating over a high-frequency pulse current period proceeds continuously, as with direct current, and coatings become coarser-crystalline. Secondly, one should take into account a decrease in the amount of adsorbed micro-impurities and hydrogen. With increasing repetition rate of polarizing current pulses, the value of the cathode potential decreases. In this case, the gas evolution at the cathode also decreases, and the metal yield increases. Therefore, at low frequencies, the amplitude values of the cathode potential reach their maximum values, which results in the redistribution of the partial components of the rhodium and hydrogen recovery currents. In addition, it must be taken into account that at frequencies of 10–20 Hz, the rate of change in the cathodic polarization is low, about 6 V/s. This allows the hydrogen released in large quantities at the cathode to penetrate into the crystal lattice of the metal (not only in the octahedral, but also in the tetrahedral pores), forming a supersaturated interstitial solid solution of hydrogen. With an increase in the repetition rate of polarizing current pulses, the cathodic overpotential change rate increases, for example, at 104 Hz – up to 2500 V/s, and hydrogen bubbles having no time to grow break away from the cathode. Therefore, such factors as large values of the cathodic potential and low rate of cathodic polarization decrease contribute to the formation of “sessile” hydrogen bubbles, as well as the interstitial dissolution of a significant amount of hydrogen in the crystal lattice of the deposited metal. All of the above affects the structure of surface formation and, as a result, the reflection coefficient. The figures 4 and 5 show the dependences of the reflection coefficient on the current density amplitude and the pulse repetition rate.

Thus, by varying the frequency of the pulse current, the coating structure and properties can be controlled. The optimal frequency range in which the most fine-crystalline, dense and hard coatings are formed, in addition to other values, is also determined by the average current density, i.e. the deposition rate. 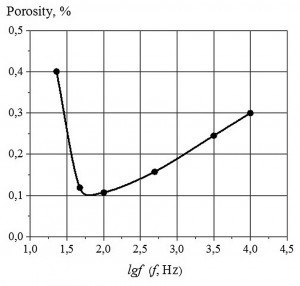 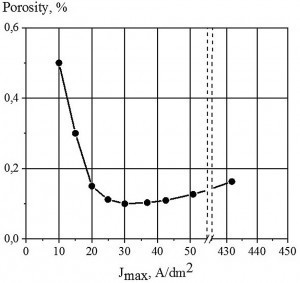 The study representing the influence of the current density amplitude on the rhodium coating properties is shown in Figure 6. Changing the amplitude of the current density from 5 to 400 A/dm2 made it possible to establish that the extreme values of microhardness and internal stresses lie in the range Jmax= 15-25 A/dm2, which is in good agreement with the polarization measurements (Fig. 1). Rhodium coatings obtained by pulsed electrolysis in the range Jmax= 15-25 A/dm2 and in the low frequency range (40–60 Hz) have high technical characteristics (Hμ= 8000-9000 MPa), however, also rather high internal stresses, about 800 MPa (Fig. 6, curve 3). 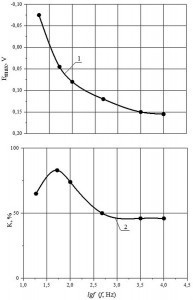 Fig. 5: Dependence of the amplitude of the cathode potential (1), reflection coefficient (2) of rhodium coatings on the pulse current frequency (Jmax= 20 A/dm2, Jav = 0.8 A/dm2) Corrosion resistance is the most important operational property of electrolytic coatings and can be considered as one of the combined results of the efficiency of technological deposition modes. This property is most significant for protective and protective-decorative coatings, for example, such as rhodium.

One of the important tasks for the rhodium plating is to obtain pore-free coatings. The dependence of the rhodium coating porosity on the pulse current parameters is shown in Figures 7, 8. The analysis of the polarization curves and the dependences of porosity on the pulse current parameters show that the least porous coatings during electrodeposition with a pulse unipolar current are formed in the region of the potentials of the maximum rhodium yield.

Determination of the hydrogenation degree showed that this range of potentials contains the minimum amount of absorbed hydrogen. Varying the parameters of unipolar pulses (frequency, amplitude), it was not possible to obtain completely pore-free coatings within thicknesses of 1–2 μm. Coatings obtained in the frequency range of 40–80 Hz (Fig. 7) and in the range of current density amplitudes of 20–60 A/dm2 (Fig. 8) have the minimum porosity. In this frequency and amplitude range of the pulse unipolar current, the values of the cathode potential provide the formation of fine-crystalline and dense coatings.

Thus, a decrease in porosity (and, consequently, an increase in corrosion resistance) of rhodium coatings obtained by pulsed electrolysis compared to direct current is associated with small crystallite sizes and a change in hydrogen evolution conditions due to the significant rate of change of the electrode potential. The surface potential fluctuations lead to continuous breakage and deformation of hydrogen bubbles, which facilitates their separation from the cathode surface and reduces adsorption by the coating. In addition, vacancies can form “vacancy-hydrogen atom” complexes with atomic hydrogen. Such complexes are 4–5 times more mobile than vacancies [15], which is also the reason for the lower hydrogen content in the coatings obtained in pulse modes.

Fig. 6: Dependence of the polarization of the rhodium cathode (1), microhardness (2) and internal stresses (3) on the current density amplitude (Jav= 0.8 A/dm2, f = 50 Hz)The use of pulse unipolar current allowed us to obtain high-quality rhodium coatings without the use of surfactants. However, a number of functional characteristics, for example, internal stresses, require improvement. Therefore, the use of bipolar and software pulse current will be the subject of our further research.