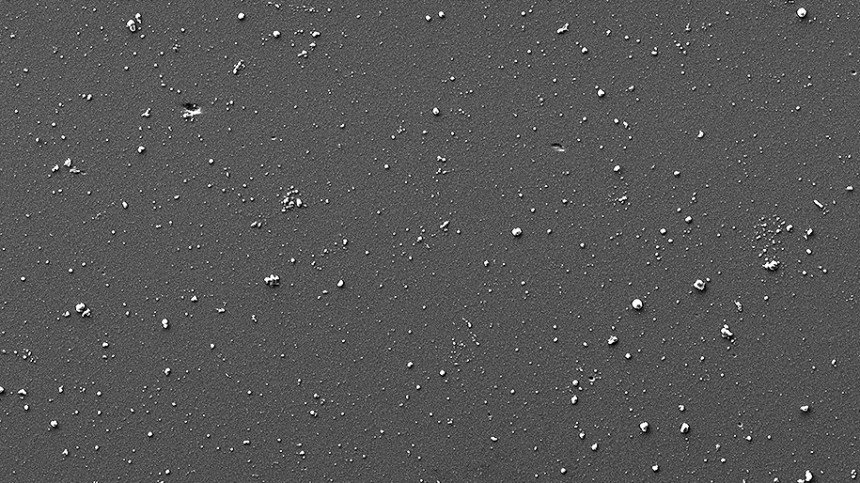 During component coating already deposited particles are incorporated into the growing layer and continuously deposited on the surface. There a characteristic defect growth structure is formed, which is reflected in a particle surface as well as a roughness. In this work, it is shown that the production of doped carbon films using composite cathodes leads to a significant reduction in arc-induced particle emission. While Part 1 covered origins of growth defects, methods of surface characterization, experimental setups and measurement methods, the final part of the article delivers the measurement results and highlights the conclusions.

Results of coating thickness measurement, chemical composition and mechanical analysis of the coating are shown in Table 1. Values for coatings of around 1 µm thickness and around 5 µm are analyzed. Coatings with non-metal dopants (B, Si) are referred to as ta-C:X, because of the near-ta-C behavior especially in terms of mechanical properties, like hardness or Young’s modulus, whereas metal dopants (Fe, Mo) lead to the formation of softer a-C:X coating. This behavior is known from several studies [3, 8, 29–32]. After the deposition process for all coatings the chemical composition is analyzed. Compared to the nominal dopant in the cathode (for all cathodes 5 at. %), the amount of dopant, except of Boron, is increased in the coatings. 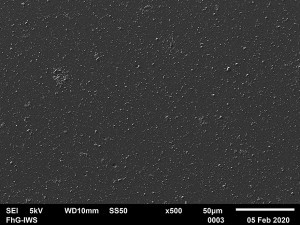 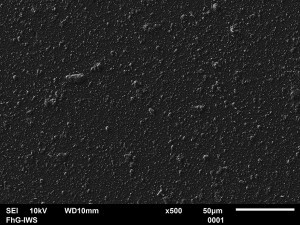 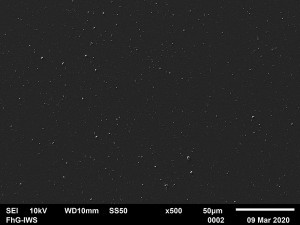 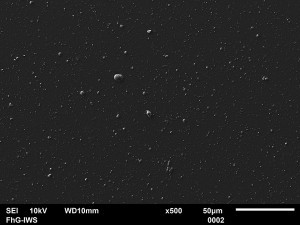 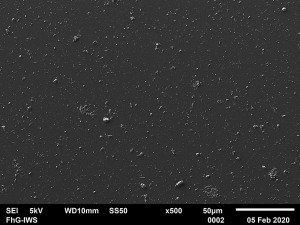 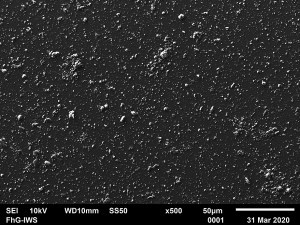 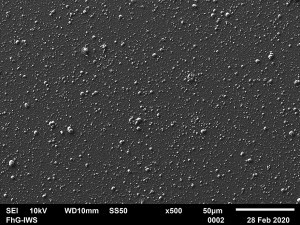 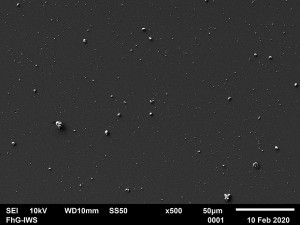 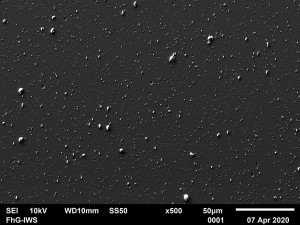 Fig. 1: SEM surface images of undoped and doped carbon coatings with coating thickness of about 1 μm and 4–5 μm

In order to investigate the homogeneity of the coatings, cross sections of each coatings were prepared by cryo-cracking the samples. Figure 2 shows an ensemble of cross section of all coatings for a coating thickness of about 5 µm. Whereas ta-C shows a very inhomogeneous cross section with features and many holes of former particles and their growth products, the doped coatings seem to be smoother not only on the surface but also in the cross sections. Exceptions are ta-C:Si and a-C:Fe, showing a heavily covered surface. Non-metal dopants lead to very smooth and unstructured almost glassy cross section. Using metal dopants, the cross section is more structured and has a rough appearance. 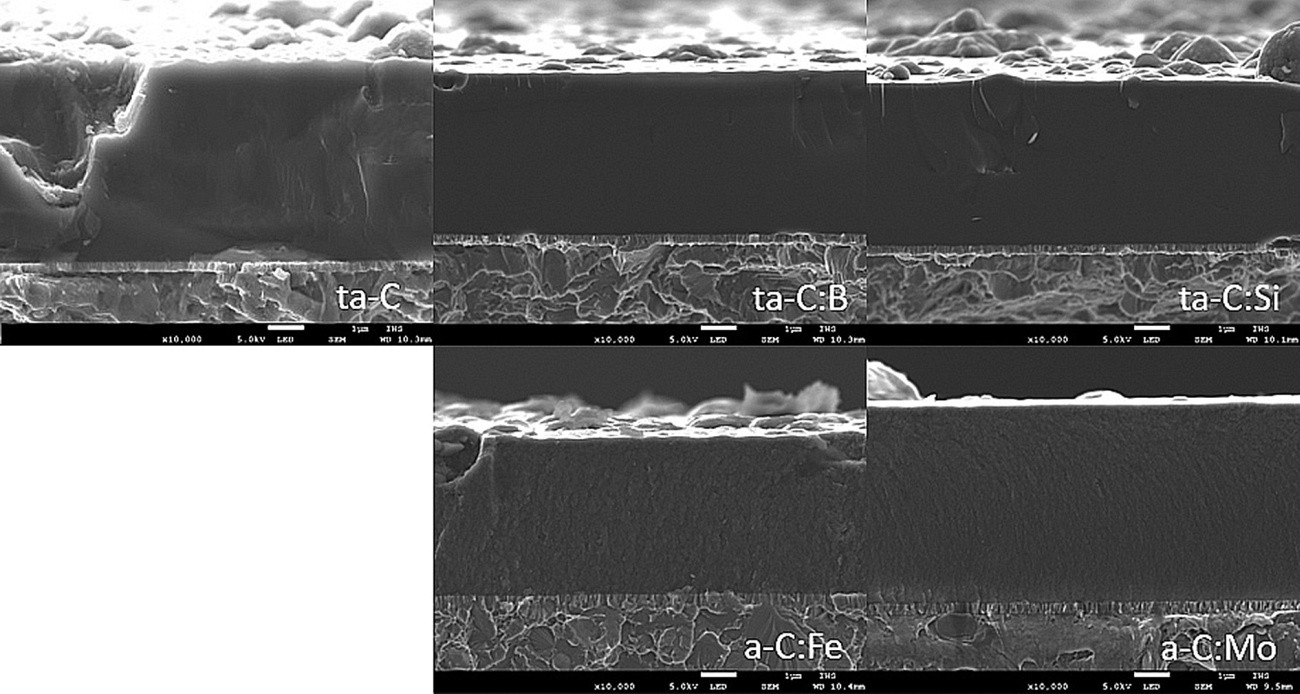 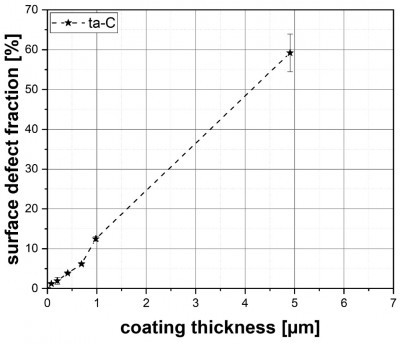 Fig. 3As mentioned above, the incorporation of macro particles into the growing ta-C film leads to the formation of cone shaped nodular growth defects. Analyses via digital image processing detect the growth defects and the defects visible on the surface, and subsequently evaluate the surface defect fraction. This parameter describes thus the proportion of the area covered with growth defects or incorporated particles. Due to the continuous formation of new growth defects and their conical growth during the deposition process, the surface defect fraction is strongly correlated with the deposited coating thickness. To demonstrate this dependency, several ta-C coatings were deposited by Laser-Arc-deposition. The microscopic images in Figure 3 a–f show the surface of the deposited ta-C coatings at increasing thickness up to a maximum of 5 µm. It can be clearly seen that even at thin films of ~0.8 μm a certain amount of growth defects is initially present in the coatings. With uniform buildup of the ta-C film these defects continuously grow in size and some defects grow together as agglomerates. Furthermore it can be observed that new particles are generated throughout the deposition process, forming smaller growth defects, when incorporated into the growing film. If the surface defect fraction is considered as a function of the film thickness, as shown in the diagram in Figure 3, a linear relationship between these two parameters could be approximated. Regarding these unfiltered ta-C coatings, the proportion of the area covered with growth defects shows a very rapid increase at steady film growth, so that at a thickness of 5 μm, already more than 50 % of the surface is covered with surface defects. This may indicate a high emission rate of carbon particles from pure carbon targets during the arc evaporation process. 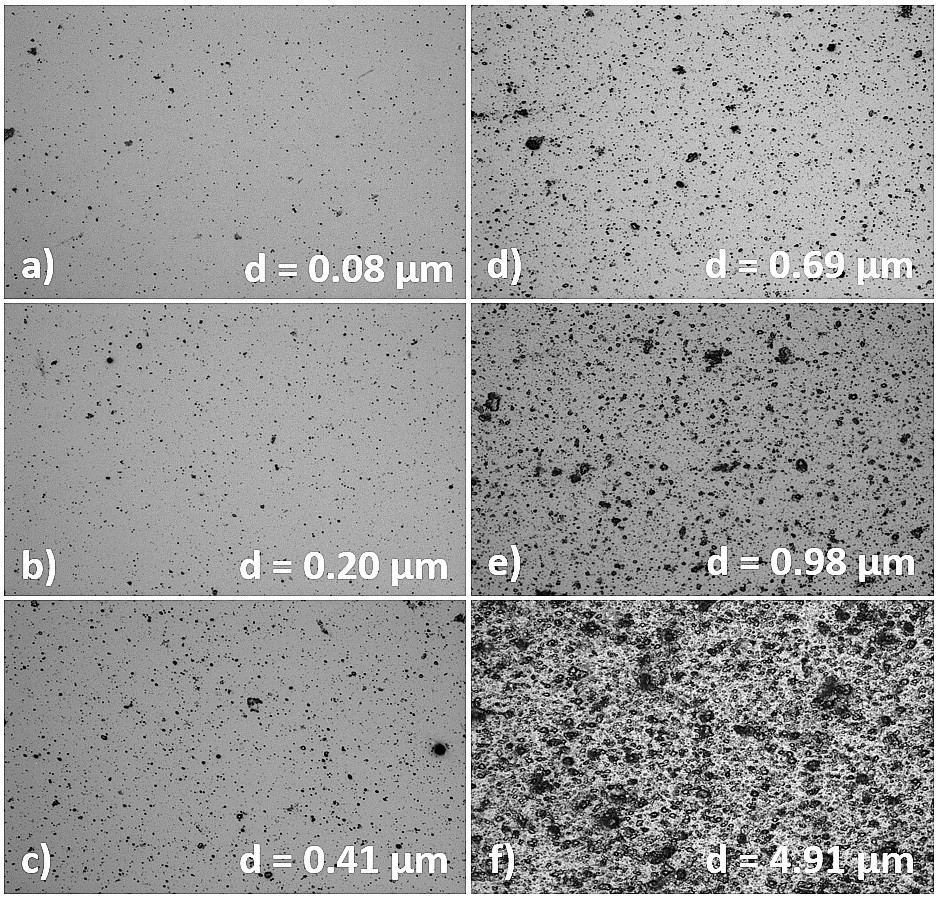 The high defect fraction of ta-C coatings also reveals the limits of the surface defect characterization method. The standard deviation of the measured values gets to a non- acceptable level above a growth defect fraction of about 50 %. Here, the threshold in the histogram (Fig. 4b, GT 3-2021, S. 316) can no longer be set correctly and it gets difficult to distinguish between the growth defects and the background. It was thus determined that the measurement procedure for evaluating the growth defect density guarantees suitable results up to layer thickness of 5 μm or surface defect fractions up to 40 %. 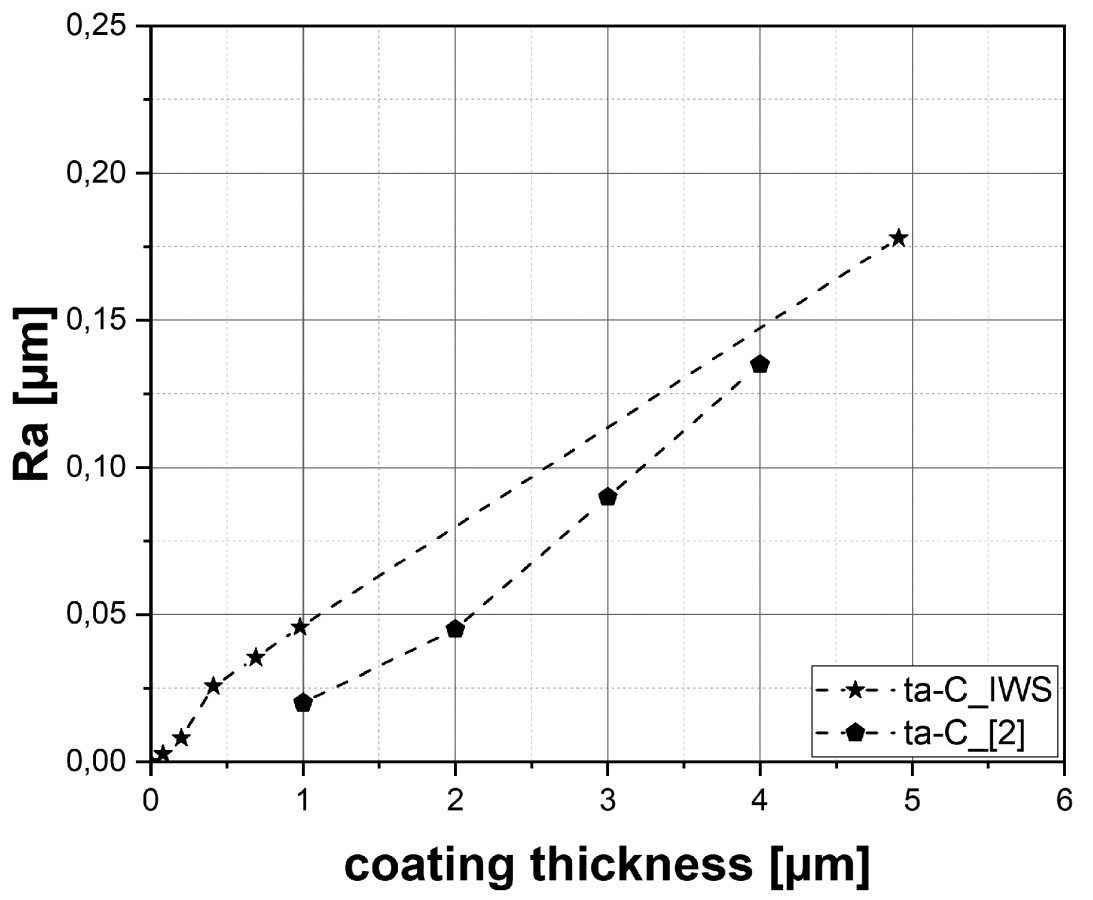 The total amount and size of the growth defects on the surface significantly affects the surface roughness of the coatings. This is usually expressed by the Ra values, acquired by the analyses of optical or tactile interferometry. In Figure 4 the tactile Ra values are illustrated as a function of the growth defect density to show the mutual correlation of these values. Similar to the surface defect fraction a linear correlation to the deposited coating thickness can be assumed. This assumption is further confirmed by recent investigations on the influence of doping concentrations on the coating properties of ta-C coatings by Schulze [2], as demonstrated in Figure 4. 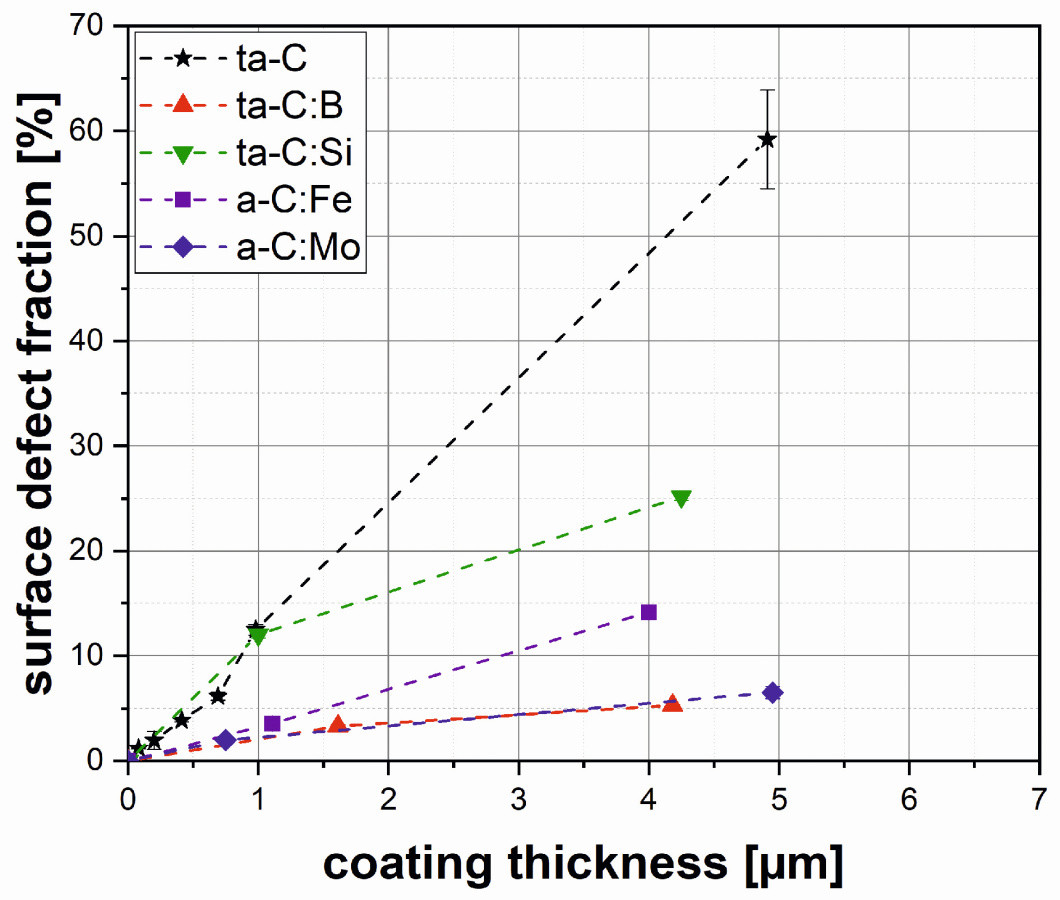 Fig. 5: Surface defect fraction as a function of coating thickness for ta-C and different dopants

The a-C:Fe coatings exhibit similar values at thin 1 μm coatings as a-C:Mo and B, but show a faster increase at thicker coatings, where about 14 % of the surface is covered with surface defects at a film thickness of 4 μm. In order to examine the effect of the doping elements in detail, the cumulative number of surface defects over the respective defect size for each coating type is shown in Figure 6.

Figure 6a and 6b refer to the 1 µm and 4–5 µm thick coatings, respectively. In both diagrams the highest number of growth defects is recorded for pure ta-C. At a thickness of 1 µm all coatings show a similar distribution of very small defects at the size of 0.005–0.01 µm2. However, pure ta-C exhibits a very steep gradient at larger defects of up to 1 µm2, indicating that many of them are present on the surface. Contrary, 5 µm ta-C coatings already show a significant higher number of small defects while the gradient remains similar in all investigated coatings. All doped coatings show a lower number of defects at 1 µm as well as on the 5 µm thick coatings. Among the doped coatings, ta-C:B exhibits the most defects on the surface at 1 µm, followed by ta-C:Si and a-C:Fe. At a coating thickness of 5 µm, however, both elements (Si and Fe) lead to a higher number of surface defects than ta-C:B coatings. a-C:Mo constantly reveals the lowest number of surface defects at the investigated coating thicknesses. The diagrams further show the maximum size of defects detected on the coatings surface. In all cases the occurrence of very big defects is rather rare, as indicated by the graph flattening at greater defect sizes. The final value of each graph indicates the maximum size of the defects. It is noticeable that ta-C:B coatings show the smallest maximum defect size at both coating thicknesses. Especially at thicker coatings the dopants Mo, Si as well pure ta-C lead to the formation of some very big defects of over 100 µm2. 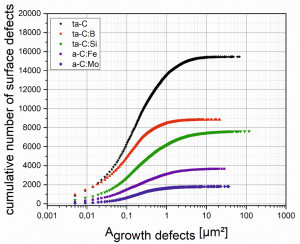 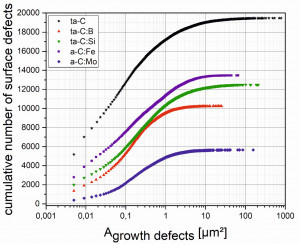 Fig. 6: Cumulative size distribution of the surface defects of the different doped carbon coatings in comparison with undoped ta-C and in dependency of the coating thickness 1 μm (a) and 4–5 μm (b) 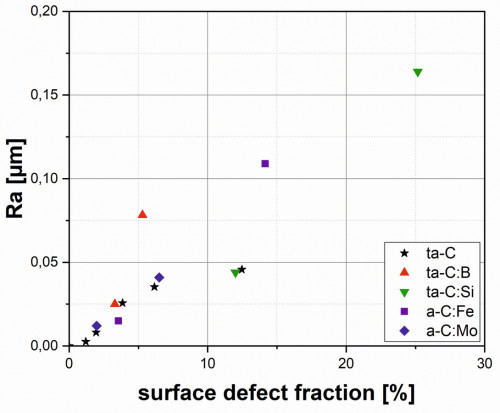 Fig. 7: Ra values as a function of the surface defect fraction for the different doping systems The high defect fraction in pure ta-C coatings can thus be explained by the fact that by far the greatest amount of growth defects are present on the surface as well as by the formation of very big defects. This suggests that the emission rate of initial particles from undoped carbon cathodes is particularly high, leading to the formation of a great amount of new growth defects when incorporated into the growing film. In all cases of doped cathodes, a lower number of growth defects was detected on the surface in respect to pure ta-C coatings. Doping graphite cathodes with the selected elements hence results in a lower emission of initial particles and thus to a lower surface defect fraction. The origin of this effect could be explained by different evaporation behavior of doped carbon cathodes. The emission rate of particles very much depends on the surface properties, density and electrical conductivity of the cathode material [3, 15, 28]. Hence, by changing the cathodes microstructure and chemical composition the number and size of particles emitted can be influenced. Concerning doped (t)a-C:X coatings (Fig. 6) a low surface defect fraction at ta-C:B and a-C:Mo coatings can be detected. However, it can be observed that on the one hand significantly more surface defects are formed in ta-C:B coatings than with the other dopants, but on the other hand this leads to a low surface defect fraction. This in turn indicates a high number of very small emitted initial particles and grown defects at ta-C:B, whereas for a-C:Mo a small amount of defects with a comparable higher area is formed.

The study focused on evaluating coating surfaces with respect to the surface defect fraction caused by arc-induced particles. For these analyses, a surface characterization method was developed based on the automatic evaluation of light microscopy images, which is hallmarked by the following approaches:

By evaluating the surface coverage with defects, a so called defect fraction was defined. The following correlations were found:

The method of optical surface evaluation with determination of the surface defect fraction is a reliable method for determining the particle-induced defect density in arc-deposited carbon films. It correlates well with the classical topographic roughness measurement. In contrast to the tactile measurement, however, the optical method described captures a significantly larger area fraction and is thus more reliable.

Further research should be conducted on:

to the colleagues and students of the Department of Carbon Coatings at Fraunhofer IWS and Dr. Jörg Kaspar and M.Sc. Martin Kuczyk, members of the Group of Materials and Failure Analysis.