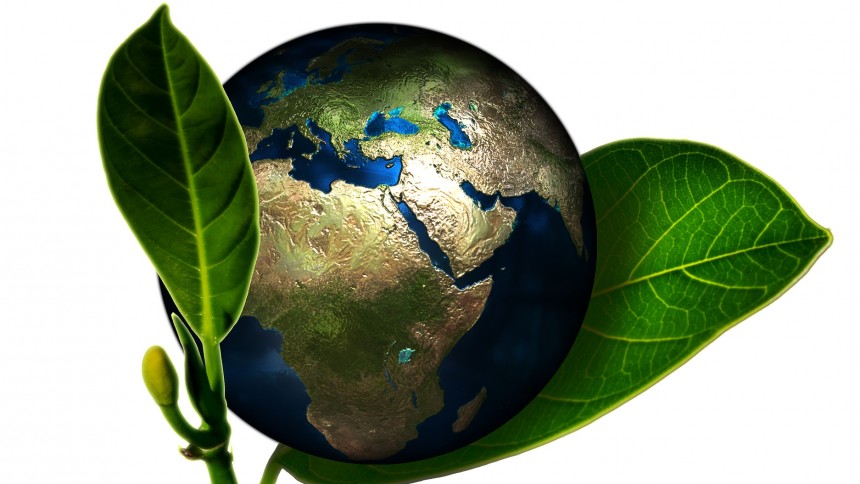 Nowadays most aeronautical parts made of aluminium alloys are protected against corrosion by surface anodising and multilayer painting. The treatment is usually carried out with Cr(VI) based compounds. However Cr(VI) substances are affected by REACh regulation and the European Commission will set more and more restriction for their use from 2024 onwards. To date, there is not any Cr(VI)-free protecting treatment for Aluminium 7000 series alloys that match the results obtained with the Cr(VI) based coatings, so, it is necessary to develop an environmentally and Cr(VI)-free acceptable alternative process.

Different process conditions were analysed in order to select the ones that provide good adhesion of the e-coating with the substrate and improve corrosion behaviour.

First, the effect of e-coating curing temperature on the coating adhesion and its corrosion behaviour was evaluated. For this purpose, three different curing temperatures (100 °C, 120 °C and 140 °C) were analysed keeping curing time constant for 1 h. These experiments were carried out on e-coatings with 18 µm of mean thickness.

Samples were characterized by dry-adhesion test and the ad-hoc solvent rub test and the obtained results are detailed in Table 4. As it can be observed adhesion efficiency of the coatings cured at different temperatures remains constant and are in a very good condition. Regarding the rub test, coatings cured at 100 ºC failed because the e-coating was partially removed after 100 double rubs of acetone-soaked.

Barrier effect of these coatings was evaluated by Electrochemical Impedance Spectroscopy (EIS). The barrier mechanism prevents or impedes the ingress and permeation of water through the coating which can enable corrosion reactions at the substrate via transport of electrolytes. Impedance modulus ( |Z|) is a measurement of charge transfer impedance, which in the low frequency region is indicative of corrosion resistance, while in the high frequency region is indicative of the barrier effect. The Bode plot shown in Figure 3 corresponds to the impedance spectra at different curing temperatures. In the low frequency region, it can be observed that e-coating cured at 120 ºC has the highest |Z| value being orders of magnitude higher than the e-coatings cured at 100 ºC and 140 ºC. This suggests an influence of the coating surface compositional chemistry as a result of cure reactions. The results show also a correlation with the rub test results. 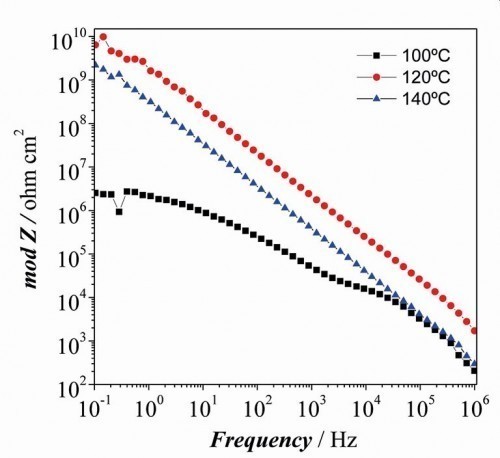 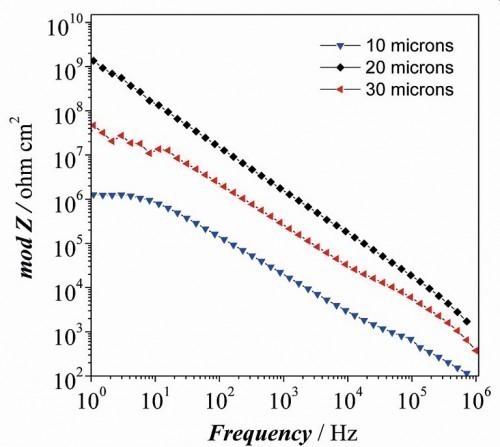 To gain a better understanding of the corrosion behaviour, EIS was used to assess the coatings’ barrier properties.

Figure 4 shows Bode plots of the e-coatings with 10 µm, 20 µm and 30 µm. As it can be observed, the impedance of 20 µm Lectraseal is higher than 10 µm and 30 µm of the e-coating. Note that the barrier effect of the coating would be expected to increase in line with the thickness. The apparent decrease (two orders of magnitude) in the barrier effect between 20 µm and 30 µm may be explained by surface compositional variations associated with higher thickness application. On the other hand, the low impedance for e-coatings with 10 µm correlates with NSS results. 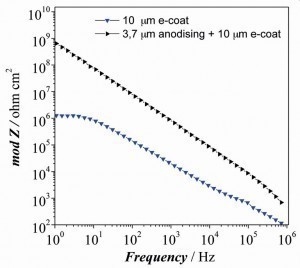 Fig. 5: Bode plot of Al 7075 with 10 μm of e-coating with and without anodisingIn order to enhance the barrier effect of the layer and thus the corrosion resistance properties, sulphuric acid anodizing was implemented before the e-coating application. Three different anodising layer thicknesses were analysed (about 3 µm, 8 µm, 14 µm) and in this study the e-coating thickness was established in 10 µm. Table 6 shows the images of these surfaces after 3000 h in the NSS chamber. All coating systems remain without corrosion after 3000 h whereas a similar e-coating without anodizing failed before 1000 h (see Tab. 5). Considering the obtained results, it is possible to confirm that anodizing layer can improve the corrosion resistance properties of Lectraseal e-coating.

Figure 5 shows a Bode plot of 10 µm of e-coating with and without previously anodizing with 3.7 µm. In the low frequency region, it can be observed that the |Z| values of the previously anodized sample is higher than the one for the e-coating without anodizing. This is an important indication that the corrosion properties have been improved by almost three orders of magnitude when samples are previously anodized. Moreover, the impedance value for anodized + e-coat 10 µm is comparable with e-coat 20 µm without anodizing (see Fig. 5). This result indicates that it is possible to obtain comparable corrosion resistance properties with a thinner overall coating system (3.7 µm anodizing + 10 µm e-coating) and an e-coating with thicker thickness (20 µm).

To sum up, Figure 6 presents a schematic representation of the current Cr(VI)-containing system and the e-coating systems, and a comparison of their corrosion behaviour in NSS, for the same e-coating thickness.

The standards, assessment criteria and results of the different tests are detailed in Table 7.

As it can be observed, in most of the cases, the selected e-coating system fulfils the analysed requirements in the same way as the actual approved coating systems does. Additionally, the stone-chipping resistance of the anaphoretic coating is higher than the system with CAA + Cr(VI)-primer + top coat. The e-coating results considering the standard ISO 20567-1 Method B ≤ 2 shows a LEVEL 2, while the results for CAA + primer + top coat system is a LEVEL 3 stone chipping resistance. These results demonstrates that adherence between top coat and e-coating is stronger than between top coat and Cr(VI) containing primer. 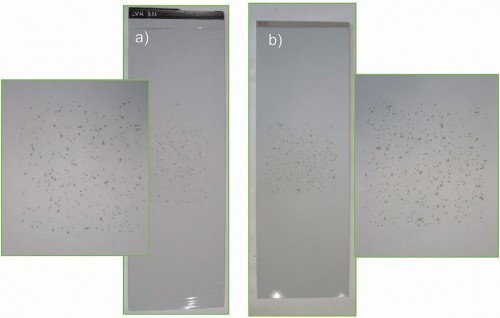 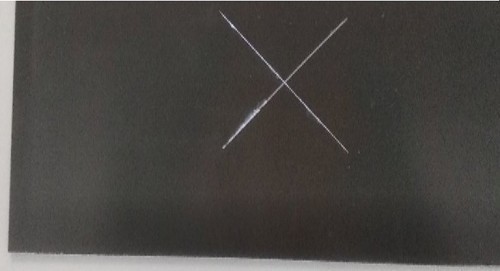 Two demonstrators with complex geometries proposed by Liebherr were also coated with the selected e-coating system. As it can be observed in Figure 9, both demonstrators were homogeneously coated.

Adhesion and corrosion behaviour were analysed on coated prototypes. In Table 8 it can be observed that coatings pass adhesion tests and remain without corrosion after 1000 h in a NSS chamber.

Fig. 9: E-coated prototypes a) Ref. A b) Ref. BThe advantages of the anaphoretic system against the traditional Cr(VI) system include environmental benefits (less energy consumption, reduction of VOCs emissions), cost reduction (labour, materials and electricity), lead time reduction, very good throwing power and better adherence with top coat (probably without time limitation between applications). Specifically, the comparative of anaphoretic electrocoatings against Cr(VI)-containing processes has shown a 40 % reduction of emissions, 13 % of energy consumption, 30 % of lead time and 21 % of cost saving.

Figure 10 presents a summary of Life Cycle Assessment (LCA) performed on the Cr(VI) system and the alternative system based on e-coating.

This study has showed that an alternative Cr(VI)-free treatment for Al 7075 based on a colloidal and polyurethane anaphoretic e-coating is feasibly. It has shown that it has good adherence, scratch and erosion resistance, chemical resistance, good paintability and similar behaviour against corrosion than Cr(VI) based coatings. The comparative of anaphoretic electrocoating against the Cr(VI)-containing process has shown a reduction of 40 % of emissions, 13 % of energy consumption, 30 % of lead time and 21 % of cost saving. All this thanks, mainly, to the elimination of the Cr(VI)-containing spray primer which has outstanding levels of emissions, energy consumption and makes more difficult the treatment process. Moreover, the application of a thin sulphuric acid anodizing combined with an e-coating offers a promising approach to provide environmentally friendly coatings with high corrosion resistance properties.

This project has received funding from the Clean Sky 2 Joint Undertaking (JU) under grant agreement No 864521. The JU receives support from the European Union’s Horizon 2020 research and innovation programme and the Clean Sky 2 JU members other than the Union.

This publication reflects only the author's view and the JU is not responsible for any use that may be made of the information it contains.

1) The comparative LCA only considers the inputs and outputs that are different in both product systems and their consumption or emission by functional unit. The functional unit (f. u.) is fixed at 1 m2 of landing gear parts made of 7000 series aluminium alloys protected under specific operating conditions.