There is growing demand for light metal alloys components in aerospace and automobile fields primarily to save fuel cost. Magnesium alloys promise a great potential for various applications as lightweight structural materials. This advantage stems from their low densities and high specific strength/weight ratio. Other advantages are good electrical and thermal conductivity, good impact strength, ability to dampen shockwaves, ease of forming at room temperature, weldability, buckling resistances, ductility and pressure tightness. Despite sounding like a designers’ dream metal, magnesium has two grave drawbacks that limit their widespread applications. One is their poor corrosion resistance. These alloys are prone to oxidation even at room temperature when exposed to atmosphere. The other is their relatively frail surface mechanical properties, e.g. hardness, wear resistance, etc. Owing to the exceptional engineering properties of magnesium alloys ample attempts have been made in last few decades to develop the suitable surface protection techniques. In this article the advances of chemical conversion coatings on the magnesium alloys are discussed for ready reference of users.

Micro arc oxidation (MAO), which evolved from the conventional anodizing process, has emerged as one of the most effective ways of improving corrosion resistance. Micro arc oxidation, also known as plasma electrolytic oxidation (PEO), or electrolytic plasma oxidation (EPO) is an electrochemical surface treatment process for generating oxide coatings on metals. It is similar to anodizing, but it employs higher potentials, so that discharges occur which leads to partial fusion of an oxide film and the resulting plasma modifies the structure of the oxide layer [104–112]. This process can be used to grow thick (tens or hundreds of micrometers), largely crystalline, oxide coatings on metals such as aluminium, magnesium and titanium [113–120]. MAO coatings, in general, exhibit superior mechanical properties such as high hardness and a continuous barrier. These coatings offer an excellent protection against wear, corrosion or heat as well as electrical insulation [121–128].

In MAO coating, substrate metal gets converted into its metal oxide that grows both inwards and outwards from the original metal surface. Because it grows inward into the substrate, it has excellent adhesion to the substrate metal. A wide range of alloys including difficult to anodize alloys with traditional anodizing processes, all wrought alloys and most cast alloys can be coated; although high levels of silicon can reduce the coating quality. The coating properties are highly dependent on the substrate used, as well as on the composition of the electrolyte and the electrical regime used. Further, the MAO process is environmentally friendly green process as it utilizes relatively mild alkaline electrolyte and is rather inexpensive technique [129, 130].

In the MAO process, metal to be treated is immersed in a mild alkaline aqueous solution and a high voltage is applied to the electrodes, which generates micro arcs on the surface of the component helping the surface temperature to reach to the level of melting point of the metal. At this temperature, the metal ions react with the oxidizing species available at the metal-electrolyte interface to form oxide coating on the surface. The coating structure, composition and its properties can be tuned with suitable process parameters. The ceramic oxide layer of MAO coating consists of a porous outer layer and a dense inner layer [131–133].

Mechanism of MAO coating formation: Initially only the electrochemical reaction occurs, and a thin oxide layer is formed. When the layer becomes thicker, and the applied voltage reaches a certain value, the arc-discharges occur due to local breakdown. The applied potentials should be sufficiently high to exceed the dielectric breakdown field at flaws to grow the oxide film. Such an energy density is easily sufficient for formation of molten metal, oxide, and the concurrent generation of gaseous oxygen. The coating growth rate and porosity is dependent on electrolyte components, temperature, and characteristics of applied current. The optimization has been largely empirical and there is no clear consensus on the coating growth mechanism. 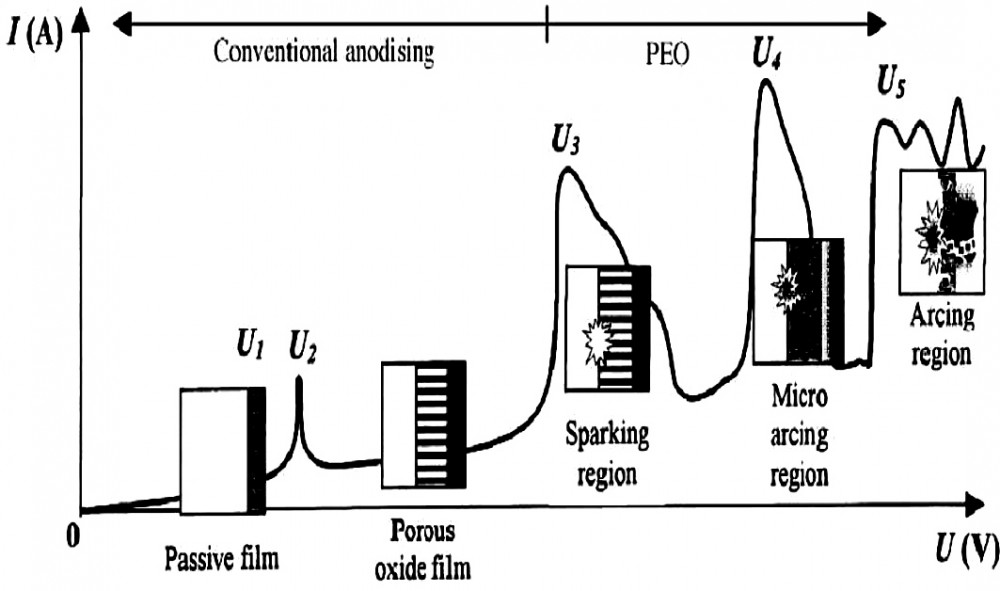 According to Yerokhin [113], as shown in Figure 1, initially, when low anodic potentials (0 to U1) are applied to the immersed component, the system conforms to Faraday’s laws and the current-voltage characteristics of the electrolytic cell vary according to Ohm’s law. From U1 to U2 metal passivates and an insulating barrier oxide film grows at the metal/electrolyte interface. At U2, which is the corrosion potential of the metal, the passive film begins to dissolve. when the potential is increased further (U2–U3), re-passivation occurs and a porous oxide film begins to grow. This is the regime exploited by the conventional anodizing.

As the potential across this film is raised beyond the breakdown potential (U3) for the given thickness of oxide film, dielectric breakdown occurs by impact ionization at discrete locations, accompanied by the visible sparks. These sparks migrate across the surface of the film, facilitating continued growth of coating. At U4, the impact ionization is supported by the onset of thermal ionization processes. At U4 to U5 regime 'micro-discharges’ occur within the oxide film, the material is locally ionized and the strong electric field draws anionic components into the channel from the electrolyte. The magnesium and other alloying elements are drawn into the channel from the substrate are oxidized to facilitate the gradual build-up of the coating. In addition to this chemical action, there are important physical consequences of the localized heating: the adjacent oxide is melted, densified and partially crystallized, while even further sintering and annealing of the porous structure occurs. Above U5, the micro arc discharges transform into powerful arcs, which may be destructive and inhibit further growth of the film. The coating formed penetrates further into the free metal surface. Subsequent arcs are more likely to occur in other areas of the coating, where the oxide film is relatively thin.

The discharges therefore have a natural tendency to preferentially thicken the thinnest regions of the film, resulting in fairly uniform film thickness, provided the electric field is fairly uniform. The porosity level in MAO coatings is generally higher. The pores observed are attributed to the entrapment of spherical gas bubbles [134, 135]. The macro-porosity on magnesium-based coatings is of the order of 40 %, however, the bulk of the film, in contrast, is quite dense.

MAO process has increasingly been employed to improve magnesium surface properties. Many electrolyte systems are reported, of which the most commonly used are alkaline solutions of phosphates, silicates, aluminates, or their combinations with several additives either to impart specific functional properties in the coating or to improve the coating growth process [136–149]. Comprehensive reviews on microarc oxidation on magnesium alloys are reported by Vladimirov et. al. [150] and Darband et. al. [151]. 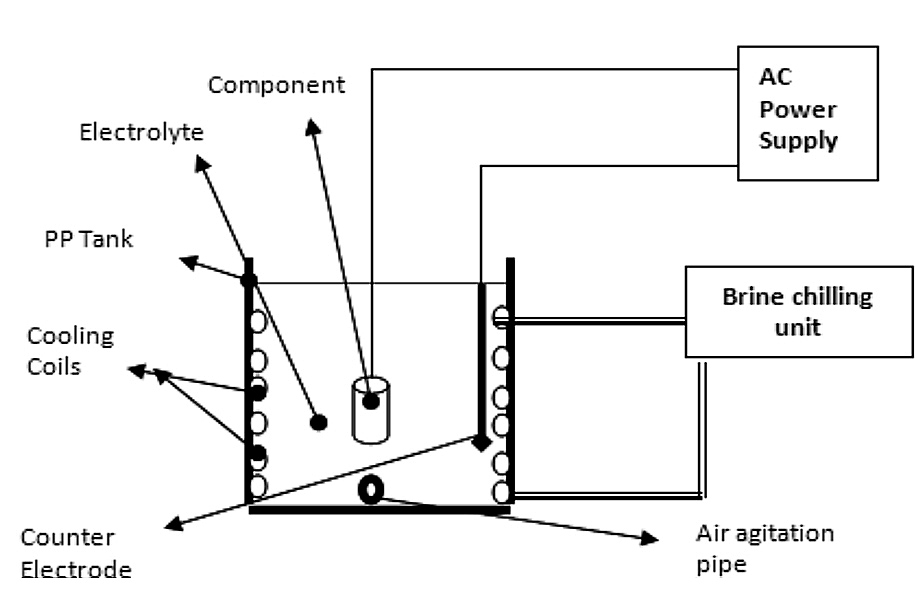 The coating formation process can be represented by the following chemical equations [151]:

Magnesium dissolution reaction occurs under a strong electric field producing magnesium ions. Formation of oxide films on magnesium is due to outward diffusion of magnesium ions and inward diffusion of OH−, SiO32−, F−, AlO2− and PO43− (as the case may be depending on the electrolyte composition) under high potentials. Film formation reactions would occur once concentrations of these ions in electrode/electrolyte interface reach a critical value. The MAO coating consists of MgO, Mg2SiO4, MgSiO3, MgF2, MgAl2O4 and Mg3(PO4)2 based on the composition of electrolyte used for electrolysis.

There are constant efforts to further improve the surface characteristics of MAO coatings. Hydrophobic PEO coatings are fabricated in an electrolyte containing additives like potassium stearate [152]. Another method to improve coatings properties is the formation of PEO based hybrid coatings [151]. The micro-arc composite ceramic coatings were prepared where the pores of micro-arc oxide coatings were filled with resins using electrophoresis technologies [153]. Addition of ceramic based nanoparticles and formation of nanocomposite coatings may considerably influence properties of plasma electrolyte oxidation coatings. Microstructural characteristics of PEO coating with effect of surface nanocrystallization was recently studied by Ni Ao [154].

Most of the work on micro arc oxidation of magnesium alloys has been focused to study the influence of a single electrolyte or a mixed electrolyte system on the structural as well as corrosion properties of anodic film. However, the in-depth understanding of mechanical properties at the local microstructural scale is not much explored. Moreover, MAO coatings consist of porous and micro-cracked morphology, which produce a heterogeneous microstructure [155, 156]. Dey et al. [157–160] have made detailed investigation on the nanomechanical behaviour of ceramic coatings developed on magnesium alloy AZ31 by the micro arc oxidation process. -to be continued-